March 06, 2020
I cannot help but notice that recently the trendy words that seem to flood the wellness media always carry words like “self-care”, “meditation”, “gratitude”, and even “mindfulness” has been thrown in for good measure. Yes, all these single-word suggestions sound good. We all need to know how to take our stress level down a few notches at a time when we need to keep our face masks up.

So when I read the news about a nail being found in the pumpkin mushroom soup of an unidentified Asian passenger on board our national carrier bound for Auckland, imagine my dilemma. Should I feel grateful that my previous soups on board were served without any nails? Or should I feel grateful that I could not afford to fly our national carrier often enough to be served soups which might actually have carried nails or other specials in them? As you can see, I am pretty new to this wellness speak and hence very confused about this “gratitude” aspect of the trend. 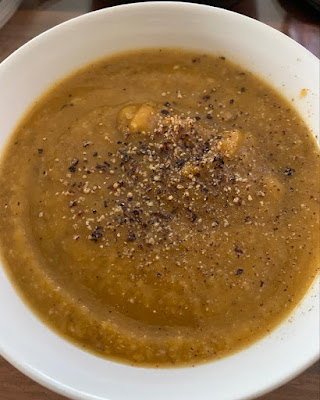 Like any dutiful social media consumer, I meditated on this for a good while (read: 2 seconds). At the end of the meditation, I concluded that as part of my “self-care” (read: feeding myself), I should make the said pumpkin mushroom soup and find out for myself if such a soup is really that spectacular that the said passenger actually lost his appetite after the nail was removed from the soup.

I must say that this combination of pumpkins and mushrooms to be the most intriguing. I have had countless mushroom soups and numerous pumpkin soups on a standalone basis but never both together in a bowl. And I would certainly hate to think that this soup is the brainchild of some ingenious chefs to salvage leftovers.

Instead of starting off with raw cubed pumpkins, I had roasted them in just salt, pepper and olive oil to give the soup the smokiness. Then tossed the chopped onions into olive oil in a pot and toss the chopped mushroom in. I used white button mushrooms, but I am sure any mushroom (except dried shiitake or, heavens forbid, canned button mushrooms) will do. Once the mushrooms have reabsorbed its cooking liquid, dump the roasted pumpkins into the pot and add a good measure of chicken stock to it. Bring to boil and you are almost at the finish point.

The tricky part in making blended soups is the pureeing. This is where you will most likely land yourself in hot soup, quite literally.  Regardless of how full you fill blender jug, hot soup has a tendency to build pressure within the jug when covered in preparation for blending. I am sure that physics geeks can do a better to explain the correlation between temperature and pressure. So when you hit the ON button, you had better be already dressed in hazmat suit.

If, however, you happen to be those without access to anything remotely similar to a hazmat suit like myself, I humbly suggest an immersion blender for the task on hand. They not only make the pureeing a breeze, the clean up is also speedy.

After you peel off your protective gear or rinsed off the immersion blender, you will find your facing a pot of smooth, savoury-sweet and rich tasting soup which will make you forget that it is totally meatless.

So just go ahead, remove your dentures and slurp away (if they don't have nails in them, that is).