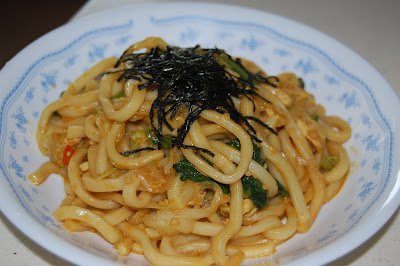 The day after we came back from Tokyo, we immediately suffered from Japanese food craving. No kidding! So we had lunch at a convoyor belt sushi bar, Ichiban Boishi. I spotted this dish on the menu and I couldn't think of a reason why I had never tried it. So when the dish came, I thought it looked very much like our hawker 煮炒 version of Hokkien Mee, except that it is not drenched in dark say sauce. Instead the udon was carried a curry flavour which I thought adds a spunk to it. We ordered Seafood Yaki Udon, but it was more like baby mussels yaki udon. Those mussels didn't taste fresh, which was just as well, since Hubby and I aren't big fans of them.
So after browsing a few Japanese websites, I came up with my own version of this dish. I don't think I would be sharing the recipe here cos I don't have the proper measurements for the ingredients.