December 31, 2008
I don't know what hit me on the head. Something must have short circuited up there. Wacko enough to make these!
I hated sweet peppers. Especially green ones. I don't know why. Maybe it is the smell. Not too sure. I just hated them.
But some time ago, my brains got re-wired. It was roughly about the time when I tasted roasted sweet peppers on pizzas and then again on sandwiches. It was entirely a new experience for me in eating sweet peppers. Why wasn't I fed these in the first place! Well, over at this side of the world, the only way to cook sweet peppers is usually a quick stir-fry which would leave the peppers tasting raw.

While flipping my The New Best Recipe, I remembered seeing this recipe and thought that this would be something that I won't ever try in my lifetime. Well, never say never.

Preparing the rice stuffing was somewhat like making fried rice and then stir in the shredded cheese. I forgot to get parsley, which was listed in the recipe to be stirred in once the rice was mixed in with the minced meat. Then just fill the peppers up and spoon some ketchup over them. Delicious, pleasant on the eye, peppers tasted sweet and well balanced meal all-in-one! 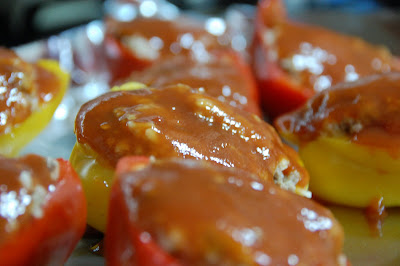 The cold leftovers are wonderful too! 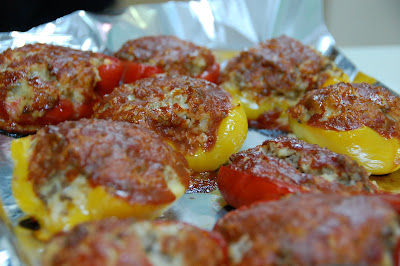