Dinner for a lazy day 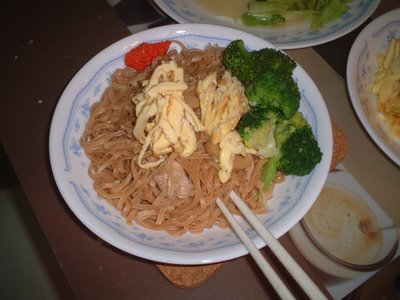 After putting in a tiring day, what hubby and I looked forward to for dinner is something convenient and fuss-free. We used to call such meals TV-dinner meals, but since we don't eat in front of a tv anymore, it is simply called quick food. In fact, in my hubby's dictionary, a quick food ought to be something that can be eaten with only a spoon! Short of cooking instant noodles or calling take-outs, one-dish meals is as close as it can get.

Earlier in the day for lunch, we made Hainanese chicken rice and the chicken rice chilli. However, the chilli had to be made in bulk, we ended up with a full jar (think: reused Skippy Peanut Butter jar) of the chilli to be consumed within a week! That's how we thought of yee fu noodles as the chilli goes perfectly well with noodles.

While preparing the noodles, I realised that veggies are missing from our food. So a quick trimming of two broccoli heads, stir fry them quickly with some minced garlic, and we have a balanced meal. However, this dish taught me something too! As Hainanese chicken rice is made by boiling the chicken in water, we invariable had a pot of chicken stock, which was waiting for me to decide its destiny. So while frying the broccoli, I thought of adding some of the chicken stock to it, and then thickening it with some cornstarch. This really gave a boost to the flavour of an otherwise plain dish. It's no wonder that French Master Chef Escoffier said that without stock, nothing can be made. In the same vein, I had actually been thinking of making stock in batches and freezing it for later use as recommended by so many cookbooks. But, as always, I never got around to doing it. Well, perhaps when I do that, I will put up a post on it then.

Oh, in case you are interest in making Hainanese chicken rice chilli, here's the recipe:

Combine all ingredients in a blender and blend till fine. Store chilli in a glass bottle (not metal or plastic as it might react with the acid). Keeps well for a week in refrigerator.

To serve, stir in a small amount of sesame oil.