Friend: "... During my off days, I'm my son's care-giver. We would go down for breakfast, lunch and dinner at coffeeshops nearby. And then, we would ..."

Friend: "Yeah, cos my wife doesn't cook and I find it too much of a hassle to ..." (He misunderstood my wide-eyed expression as one that was judging him as a bad parent for not providing home cooked food.)

Me: "It always takes me at least 2 hours to decide on what to eat when we are eating out."

This is the same friend (it is a miracle that he still considers me his friend) whom I had this conversation with about make decisions.

When meal time hits, I would panic and chew my nails. What to eat??!! Dining out is always a challenge for me. On such occassions, Hubby would start me thinking hours ahead and I would invariably reply "I'll think about it". He would check for progress update every hour or so until I get so annoyed and would retort "Fine, why don't you decide!". By which time, he would probably have either finished a DVD or caught a broken nap.

On good days, we would eventually get out of house and eat. Otherwise, we would end up raiding the fridge and pantry instead.

This happened to be the case last Saturday when we were deciding what/where to have our dinner. After hours of tossing the question to each other numerous times, it was obvious to me that we were just N.A.T.O. (No Action, Talk Only). So I threw my mom the suggestion of making gnocchi which she was eager to buy frozen from the supermarket earlier the day. Within minutes, we were boiling potatoes and blending spinach. 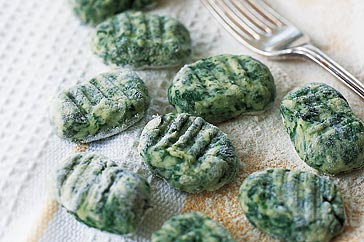 Photo taken from Taste Magazine
I happen to have Martha Stewart Living Cookbook: The New Classics lying on the couch, and conveniently has a recipe for Spinach Gnocchi.

Though the recipe looks lengthy, the steps were quite simple really. Boil whole potatoes, peel and mash. Add blended spinach. Add beaten eggs and flour, then season it. Roll into thin logs and cut into bite size. The dough was sticky but with floured hands and work surface, they were manageable. With less flour, these gnocchi were soft and taste of potatoes and spinach. While waiting for them to boil, I sauteed some chicken,zucchini and carrots. In less than 2 hours since we started boiling potatoes, we were back to our game of Scrabble with happy tummies.

And all this while, I didn't even have to change out of my comfy faded T-shirt and shorts.