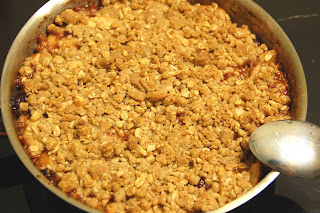 It is hard to know when Spring ends and when Summer starts here in Singapore. But I will take the recent heat waves as a sign that Summer is here and we are in for hotter days yet. Since I missed the boat for Spring cleaning, I might as well hop onto Summer cleaning, if there is such a thing.
But let it be said first that I hate cleaning. And I hate the hot days in Summer even more. My lifelong wish is to move to a place where the weather is more amiable than our insufferably hot and humid one. Preferable one with a housekeeper.
Since I hate cleaning, I won't be doing anything too major except to tackle those raging hotspots around the house. Ironically, our fridge is classified as a raging hotspot with too much stuff chucked into it. Just the other day when I was trying to search for some ginger, I found that I have lots of apples in the vegetable drawer. No wonder all my other vegetable and fruits in the fridge are spoiling as a fast forward speed. That's when I thought of making an apple pie.
But wait, I don't want to be melting in the kitchen at the same rate as the butter in those finicky pie pastry. I want something faster and fuss-free.
So I went clicking on the Internet, waiting for an idea to drop from the sky.
*click, click*
*click, click*
And it did. Dropped from the sky/cloud/web or wherever the Internet is.
... in the form of Cook's Illustrated Skillet Apple Crisp. For their amazing recipe, please check out First Look, Then Cook.
Crunchy cinnamon scented oat topping with warm tender apple chunks bathed with a syrupy cinnamon slurry. I can't remember what I was doing from the time I finished reading the recipe to the time when I was scrapping my fourth helping of apple crisp into the bowl and had this conversation at the table.
Hubby: "The apple crisp is nice."
Me: "Mmm-hmm ..."
Hubby: "I'll keep the rest when it has cooled down."
Me: "Mmm-hmm ..."
Hubby: "You really do like the apple crisp."
Me: "Mmm-mmm ..."
Hubby: "Is there something that you want to tell me?"
Me: "Hmm ...?"
Hubby: "Something like ... you pregnant?"
Me: "What??!!"
Hubby: "Oh, you do talk!"
I haven't touched the remaining apple crisp since.
It has been two days.
And I think that's long enough as a show of my protest against his verbal abuse. I'm going to dig it out for tea later.
It's all part of the fridge clearing. Really!