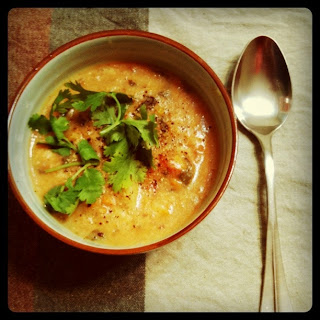 The last beans still in its original bag which I picked up from FoodXervices is the Great Northern Beans. I can't remember why I had picked it up in the first place other than the fact that these beans are hard to find in supermarkets without costing you an arm or a leg. Think: beans from Bob's Red Mill. I had recently paid S$12+ for their packet of French green lentils. Erm ... why did I pick up those French green lentils?
Anyway, back to these jelly bean-size white beans which I had to justify their presence in my pantry. I looked up the index of cookbooks and was disappointed to find that there were only a handful of recipes which this Tuscan White Bean Soup was one of them.
The recipe has been adapted from The Best International Recipe which featured selected popular recipes from the Italian cuisine. Their version will have you soak toasted bread cubes in the soup, which didn't fly with me. I prefer dunking crunchy cubes into hot soup while I eat. My dentist won't like the damage she will have to repair.
The recipe calls for 2 cans of beans which I thought could be easily be replaced with 2 cups of dried beans. So wrong! It should have been roughly about 1 1/4 cups. Live and learn, my friends. My soup was literally chocking with beans. It was so thick that I had to add more chicken stock (this is where I deviate from the recipe, again) to it, after which I ended up with a huge pot of soup. Well, not that I mind a big pot of soup which gave us more than 8 - 10 big bowls.
I learnt a few things making this soup.
(1) 1 can of beans should be substituted with only 3/4 cup dried beans.
(2) Toasted bread cubes is a must for soup!
(3) Thick soups make good lunches.
Given that Soup Spoon serves soups at range of S$5.60 - S$8.20, I can't help think how much profit each pot will rake in for them. Maybe a second career?