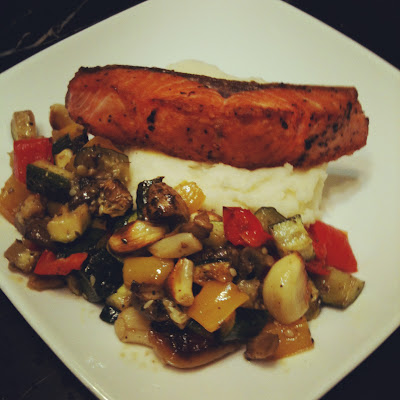 This is what I would call a homemade restaurant-style dinner. This is the kind of dinners that I would like to eat in restaurants. Natural and wholesome food. But to eat like this in restaurants these days, it would usually cost us north of S$120 (inclusive of tax and service charge) just for 3 persons for main courses. I can't imagine what the bill would be like if we had ordered drinks, starters and desserts to complete the meal.

I mean who can blame those restaurants, even honest and decent ones, with prices of food going up each time I checked the price tags in supermarkets. Did you know that now a pack of fresh red chillis (about 10 per pack) cost S$2.40 when it used to cost only S$0.80 just less than a year or two ago. And that is how many times more?

Well, my best guess is that this plate probably cost S$8 - S$10. But of course, this figure doesn't take into account the labour cost that went into marketing, prep work and wash up. If you add all these up, perhaps a restaurant meal isn't that expensive after all.

Last night's dinner was pan fried salmon with mashed potatoes and roasted vegetables. With a bit of planning and coordination, the dish can come together in an hour from start to ready. Perfect week night dinner for us.

I started work on the dish for roasted vegetables since they need some time in the oven. I chopped up red and yellow capsicum, zucchinis, eggplant, cherry tomatoes, white button mushrooms, onions and garlic. Give them a good round of seasoning with salt and pepper and then douse them with lots of extra virgin olive oil. Toss them well and lay them on a baking dish (vegetables pieces should be well spaced apart to prevent overcrowding). Roast in a 200 degC oven until the vegetables start to char, about 30 minutes for a tray.

Pan frying fish usually makes quite a mess of the kitchen and your whole house will stink for the next 24 hours. So I tend to avoid cooking fish this way. But after unmentionable number of times we had baked salmon, my brain just screamed ENOUGH! I just don't want to see another foil wrapped salmon on my table.

To pan fry the salmon fillets: Rinse the fillet with salt water to get rid of any fishy smell. Remove any pin bones from the fillet. Pat the fillet dry and cut it into required portions. Sprinkle salt and pepper over the fillets. Heat a skillet with a generous glug of olive oil. Place fillets, skin side down, into the skillet and fry until golden brown on all sides.

I can't believe that I didn't share my ultimate mashed potato recipe here!!?? Well, I don't have a recipe actually and I can't find it online since I don't know where I came about this recipe. But I have been using it for the umpteen times I have been making mashed potatoes and I think it is simple enough that it doesn't need a recipe.

For creamy, smooth and rich mashed potatoes, start off with Russet Burbank potatoes. Peel the potatoes and cut them into cubes. Throw the cubes into a pot and fill it up with water to cover. Add about another 2cm over the top of the potato cubes. Boil until the potatoes are soft. What you want is when you take a fork to it, the potatoes just falls apart. This is crucial to a smooth texture and it saves some arm work. Haul the potatoes up into a big mixing bowl and add the following: butter, cream cheese, salt and pepper That's all you need. Mash the potatoes and mix well.

Though the dinner was good but we still had to round it off with a dessert. Actually not a dessert but more of a snack. A snack from my childhood.

Do you know what it is? 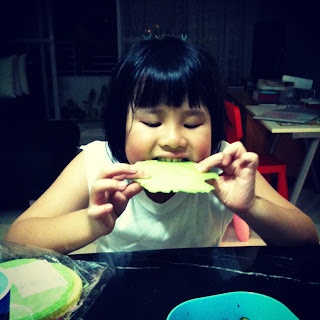 Can you guess it now? 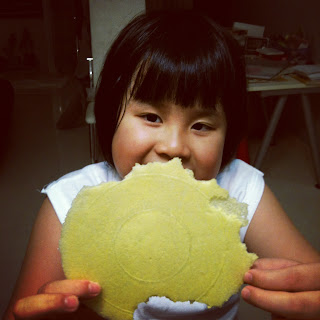