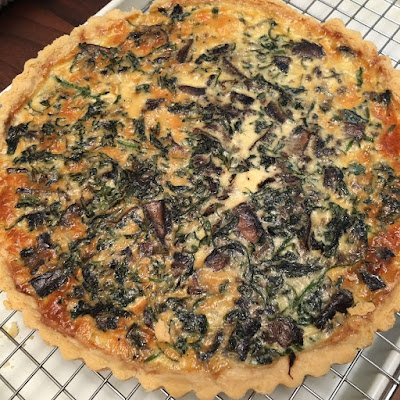 My first attempt at quiche making was back in 2006. To put it kindly, back then my cooking skills was still in the making. My tart looked better than my quiche, which would be better off be called a pizza.

Ten years later, I am happy to report that things are somewhat different around my kitchen. Although some things, such as inability to follow a recipe or to roll out a decent pie dough, still remain the same.

This was dinner last night for our princess who wanted something different for a change. Since I had a carton of half and half sitting inside my fridge screaming to be used, this ticked all the boxes.

The pie crust recipe comes from The Joy of Cooking. The book version called for half shortening and half butter, but I changed to all butter as in their website. I only found out that they had a website this morning! The problem with making short crust pastry in a climate such as Singapore is that the butter melts almost instantly once out of the fridge. I had to work super fast and yet it was still melting. I was not able to follow the recipe to add the water to the dough because it was already so sticky! Despite that, the crust turned out well. Only a tad crumbly at the edges. 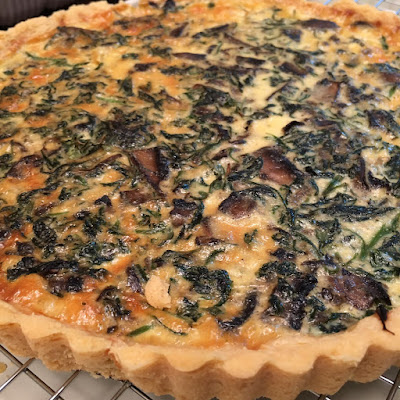 Fillings for quiche is always whatever is in the fridge. For last night, it was spinach and portobello mushrooms. Just saute them with onions. The custard filling was made with 1.5 cups half and half and 3 large eggs with salt and pepper. Easy as pie. Throw in a hand full of whatever cheese you have on hand at the base before laying on the vegetables.

After about 25 minutes in a 180 degC oven, it was pure happiness. And fats.