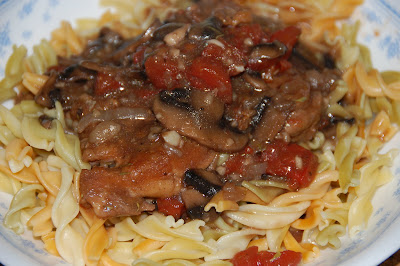 I didn't realised that it has been a 3 months since the last recipe testing. My apologies to my faithful foodie readers for feeding you all my blabberings during this time (this is assuming you are still around to read this apology!).
This is another Cook's Illustrated recipe, which needless to say that I didn't follow it to the last word, came from a book I'd gotten two years back but didn't even attempt a single recipe from it. Yes, I am one such a person who hordes cookbooks and reads them cover to cover. But that is another post altogether. Back to our Chicken Cacciatore.
When I flipped through Italian Classics, I was reminded of the perfume of simmering tomatoes with basil, heady frangance of roasting garlics and tastes of delectable morsels of pastas/pizzas/antipasti doled out by the cooks from an Italian restaurant which I worked in during my school days. Names of dishes, ingredients and wines sound so familiar and makes me wonder if the book will be able to recapture food similiar to those I used to put in front of those diners. I keep wondering.
Here's how the dish was suppose to look like. The recipe is much like making any stew and is very straight forward. The only challenge I face was trying to determine what is a dry red wine as called for in the recipe (taken from The Seattle Times). I only had Merlot, Pinot or Shiraz Cabernet to choose from. I know as much about time-space continuum as I do wines. So when the time came for the pour, I was hard pressed. Eventually, I closed my eyes and picked out one which happened to be the Merlot.
I was suppose to put the dish to cook in the oven for 30 mins, but I played truant on the oven. I simmered it over the stove in bid to bring forward dinner time. Perhaps that contributed to the lack of infusion of flavour from the braising liquid into the chicken. Hopefully, this is resolve itself after being kept overnight. Apart from that, it is another wholesome and hearty recipe to boot.