September 13, 2011
I'm not too sure what's gotten into me these days, but I found myself doing something strange the past few weekday mornings. I have been tuning my car radio to 98.7 FM. In case you are not clued in, this (I think) is the hippy-est radio station on our small island of Singapore.

Initially it felt weird. I felt disconnected. I don't know who are current bunch of DJs. I have never heard of the songs they are airing. This station was life support system plugged through my ears. It sustained me through my secondary school years. But somehow along the way, I ditched it together with my school uniform and moved on to the more matured Class 95, where I have been since. It made me wonder if this is how it would feel if I get back together with an ex-boyfriend.

So anyway, I heard this on the radio this morning and thought that it had some element of truth to it. It goes something like "The secret to keeping your health is eat what you don't like, drink what you won't drink and do what you'd rather not."

For a non-health food person, I would want to shout a loud "Yes!". But I can't in good conscience do that because I know that there is at least one healthy food that is good for you and it tastes absolutely wonderful.

I'm sure you have, at some points in your life, been exposed to this boringly illustrated picture which (I think) is trying to do its best to relay some very important information to you. 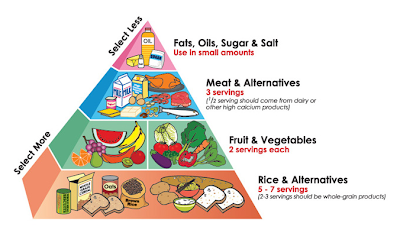 I had probably seen this Healthy Diet Pyramid during some health talks in my primary school but I don't remember much of what it was all about. Or maybe I was daydreaming. By the way, they have a slightly more visually attractive picture on their "A Healthy Food Foundation - for Kids and Teens" page, but is still basically the same thing.

Okay, back to my proclamation that there is one good thing that taste good and is actually good for you ... I want you to look at that exceedingly boring pyramid above, and look under "Rice and Alternatives". See the little note there that says "2-3 servings should be whole-grain products"? Well, that's what I want to tell you about. A whole-grain known as quinoa (read as "keen-wah") that is really tasty and it is actually recommended for daily consumption. 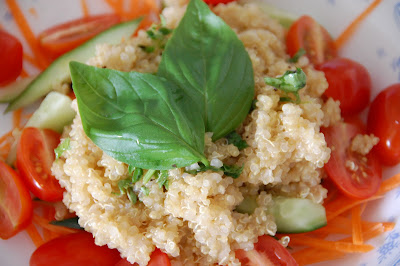 Feeling that I need to eat healthier, I went through the list of whole-grains one day and realised that there are many different types of food that I have not even heard of. Heard of millet? Wheat berries? Amaranth? I don't know about yours, but my head is already spinning.

Our Health Promotion Board did come up with some suggestions from a narrower list of whole-grains familiar to our palate, but I've tried all those and their taste didn't convince me to eat more of them. Ever tried wholemeal pasta? Don't. It changes you. In a negative sort of way. 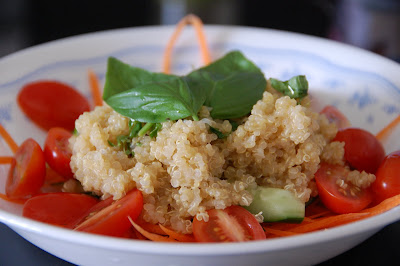 I was still holding on to my skepticism when I opened up the small bag of quinoa which I picked up from the organic section at NTUC Fairprice. Did a thorough wash and then cooked it as instructed by FoodNetwork star Giada de Laurentiis' Herbed Quinoa. I didn't even bother with the dressing because once the quinoa was done, I just can't stop eating it straight out of the pot. Just 3 ingredients and 10 minutes. I usually cheat and use Heinz Chicken Broth from the carton to cook it. So this is almost like making instant noodles. Except you drop in a splash of lemon juice into it and that it is a wholesome food. How often can you say the same thing of instant noodles?