What Sort Of Dinner Is This? 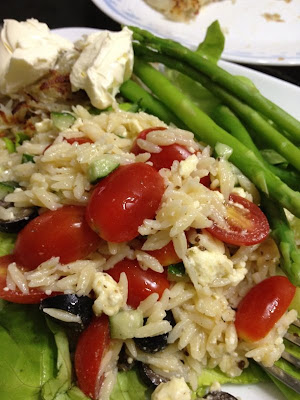 This was our dinner a few nights ago. I don't really know why, but I find myself craving for this sort of dinners more often these days. I believe that's what happens when one gets old - you realise that time is running out and you just want to do the bizarre. 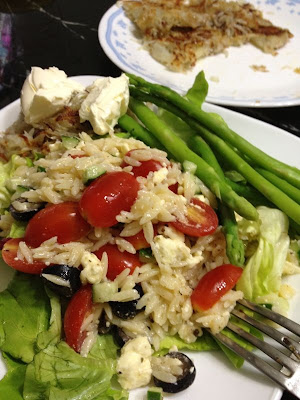 I had orzo salad with feta cheese, olives and cherry tomatoes on some salad mix, blanched asparagus and rosti with tons of sour cream. 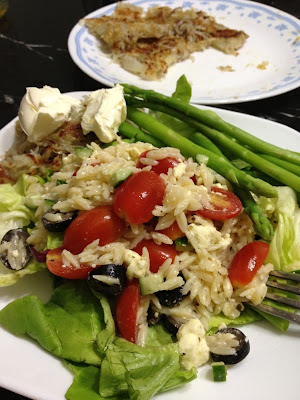 Hubby had the same thing except that he had grilled steak on his. By the time I whipped out the phone camera, he had already wolfed down half of his plate.

Our princess had grilled steak with rosti. 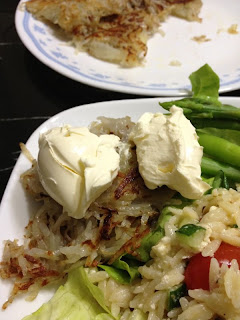 Now, let's talk about this rosti. Grab a seat, if you are not sitting down. It is a long talk.

Like many others here on the sunny island of Singapore, I was introduced to this wonderfully delicious dish called rosti when I visited Marche. Back then their rosti was a must-have item. I wonder if it still is today? I can't really remember how much it cost exactly back then, but I will put my best guess at around S$6 per serving. So after so many years (10 years?), I went back to Marche recently and was so shocked to learn from their chalkboard menu that a serving of rosti must now come with either sausage or smoked salmon and prices start at S$14.90! There's no option for plain rosti. I paid for a half burnt sausage and a small serving of the potato pancake but I told myself that this is the last time I am going to doing that.

Well, I guess I will have to thank Marche for giving me boot on my hind to make my own. If not, I will still be paying to eat this.

Again I do apologise for the lack of a proper recipe since I was half crazed with hunger and was just shooting from the hips with this. If you are keen for proper instructions, please check out The Guardian for their take on rosti.

Basically, I grabbed a bunch of Russet Burbank potatoes and peeled all of them. Halved them lengthwise (so that they could fit into the mouth of the food processor). Set the food processor up with the large hole shredder. Run the potatoes through the processor. By the time I was done, there was ton of liquid from the shredded potatoes. So I had Hubby squeezed out all the liquid from the shredded potatoes and put them onto a clean kitchen towel. Then I wringed as much liquid out of the potatoes as I humanly can. Don't worry if the potatoes start to turn brown and exude brownish liquid. It is okay! Your potatoes will turn back to white again when cooked. While all that wringing was happening, we had a large skillet heated up with a generous portion of olive oil. Distribute the shredded potatoes evenly on the skillet and fry until they start to brown. Then you are done!

But potatoes alone just won't do to complete the meal for me. So I cooked up a batch of orzo (rice shaped pasta) and just toss it with whatever ingredients found in the fridge. 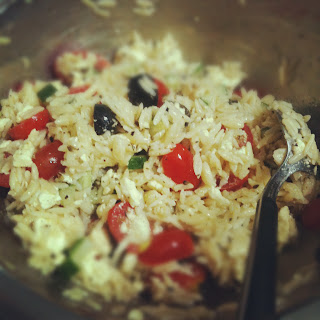 This was happiness in a bowl for me.

For proper instructions, please go over to Epicurious. I had followed their recipe for the salad dressing.

Now, as I had mentioned to you earlier that I whipped out my handphone to take photos. I lied.

Well, I didn't actually lied. The photos were taken from a handphone, except that it was Hubby's spanking new iPhone 4S instead of mine. The photos came out so much nicer than mine, except for the last one above which I took with my camera but edited it with Instagram. If not, it would have looked hideous. Just look below. 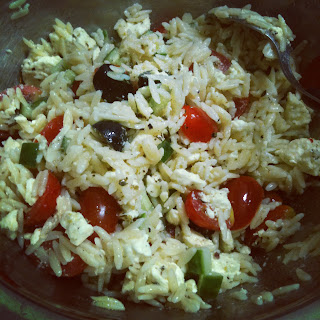 This photo just doesn't do justice to the dish and look at the colour! Okay, I think I shall not complain any longer and had better go back to my cammy.