We Went Back To Bento-ing

I was pretty much into bento-ing back in 2007. At that time, my main bento box recipient was Hubby who accepted the boxes but grumbled that they looked too cutesy for him. Guess, I lacked ways to make bento boxes macho looking. Is there such a thing in the first place?

Since our little princess started morning session, we have been making big Japanese style breakfast for her before sending her to school. Initially she had a bit of trouble finishing up everything, but eventually she adapted and we were busy cranking up different dishes before the crack of dawn. Actually, that was Hubby.

All was going well, until one day she woke up at 7.00 a.m.! In the mad rush to get her to school, I told Hubby to pack up the food and let her eat during recess time. But this mummy wasn’t going to send the princess to school on an empty stomach, so I grabbed some bread lying around on the table and told her to munch on it in the car.

After I dropped her off at the school front gate, I could hear my heartbeat pounding in my ears and all the frenzy making me feel jumpy. I must have very low stress tolerance. I told myself that I would have a good talk with princess when she got back home about her waking up late in the mornings.

But before I could even start my lecture, she told me that she liked to eat her breakfast during recess. That way she could take her time and enjoy her food while talking to her friends. Our jaws nearly dropped to the floor.

Come to think about it, what she said was quite true. In the mornings when we ate those big rice breakfast, we would inevitably rush her. Sometimes I would even take over her spoon and start feeding her like a 8 month-old. I don’t think I ever did the foie gras style though. 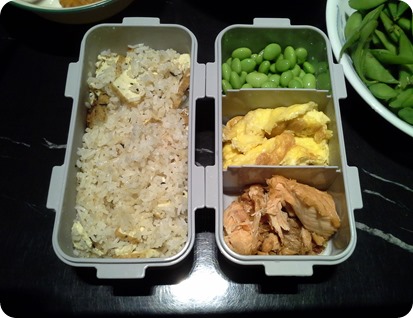 Since that day onward, she goes to school with her little lunch box. I am certainly happy that she is taking so well to it. When she was younger, she refused to bring such food to school. Instead we gave her all sorts of junk. You name it, she would have a stash of it in our snack drawer. Now at least I know that she is eating proper food during recess.

I gave her this handy little lunch box set which I bought long ago.

So we are back to bento-ing again! Isn’t it strange that some times life just happen in the way that you least expect.