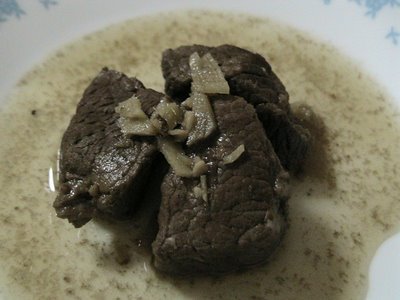 Hubby and I love beef brisket and would gorge ourselves with bowls of it each time we were in Hong Kong. I heard that most of the stalls use the same pot of stock since they started shop. Imagine drinking stock which some of it may have been cooked 15 years ago!

Everytime we see beef brisket on the menu here, we would definitely order it, but they don't come close to those we had in Hong Kong. So we resigned ourselves to reminiscing about the beef brisket we had.

I didn't even know that she has a recipe for beef brisket until Hubby pointed it out cos it was entitled "Braised beef in soy sauce". I had my doubts that this would be the answer to our prayers for THE beef brisket, but since Hubby was willing to try (guess he must be craving for it more than me), I couldn't say no.

Hubby did most of the cooking and just after an hour of simmering in the slow cooker (yeah, we adapted the recipe for slow cooker), the whiffs of the simmering stew transported us back to Hong Kong's crampy little char-chan-tings (literally means tea restaurants) with a big pots of stewing beef and spare parts at their entrance. The recipe yield brisket that are tender and taste almost as good (less the 15 year old stock) to THE ONE and according to Hubby it was quite easy to prepare. Except that we have to resist the temptation to stick our spoons into the slow cooker while it is still stewing.