Teriyaki Fish in a Saucepan 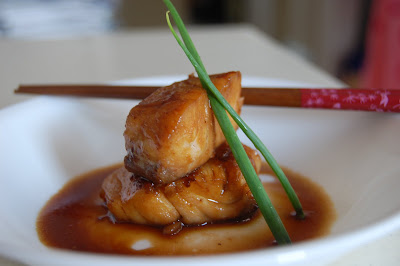 While packing food for freezing, I began to wonder why some recipes are simply called teriyaki chicken/fish, while others are called saucepan teriyaki chicken/fish. Initially I just wasn't bothered, but the more I think about it the more intrigued I was. Then I had an "Ah-ha!" moment. But this is only my best guess.
Teriyaki in Japanese literally means "glossy grill". How it is usually done is this: throw meat/fish over the grill; lightly salt it; when it is almost done, brush it with teriyaki sauce on the cooking surfaces. So this is the real mccoy.
But the same yummy goodness can also be achieve by using a saucepan. Just lightly marinate the meat/fish with soy sauce and sake; wipe dry and pan fry in saucepan; when it is almost done, pour teriyaki sauce over it to simmer for a while.
Since I am too lazy to set up the grill and brave the scornful look from hubby while he cleans the aftermath, I opted for the saucepan version. We all love this version, but I guess I still have a long way to go before I can perfect it. (^.^)