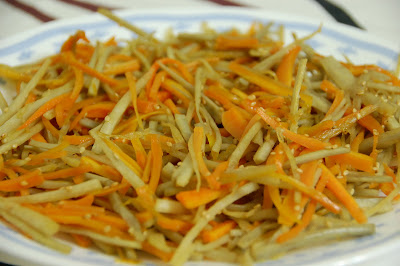 This is a two-vegetable dish of burdock and carrot stir-fried with the usual Japanese seasoning trio of soy sauce, sake and mirin.

When I was in Tokyo, this crunchy and sweet side dish appear often in bentos we ate. And true enough according to The Japanese Kitchen, "The dish tastes better after a few hours, and can be kept in the refrigerator, covered, for a day." So that and the lack of messy sauce make it a perfect bento complement. 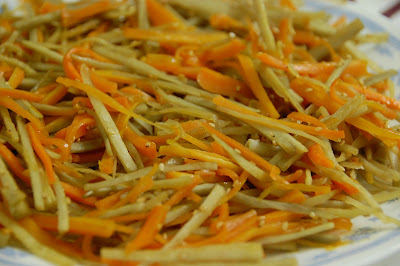 The burdock I bought from NTUC was almost as tall as our little princess. I snapped them into half for cooking miso soup and had been thinking of what to do with the remaining half. I love this root vegetable but our little princess has made known that she doesn't care for it. Sigh ...

In case you have never encountered the burdock, this is how it looks like out of the ground. They are slender, astonishingly long, look almost bark-like and usually encrusted with dirt. Once you scrape the tough skin off, the exposed burdock is beige and brown, which discolours quickly. Almost immediately the air will be permeated with its earthy fragrance. Burdock is high in fibre and other nutrients. As well as some medicinal value. 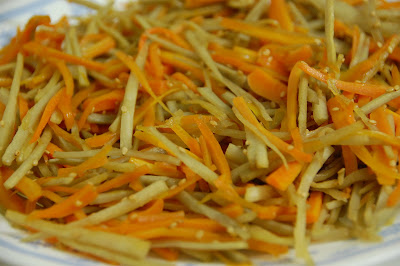 Directions
1. Heat oil in skillet. Add the burdock and cook until well coated with oil. Add the carrot and cook 2 mins.