February 26, 2011
Despite my massive collection of cookbooks, I still do visit the libraries to check out their cookbooks. I will always walk out of the place with a book or two in hand. Sometimes even more.

Just the other day I spotted this book at my nearest library. 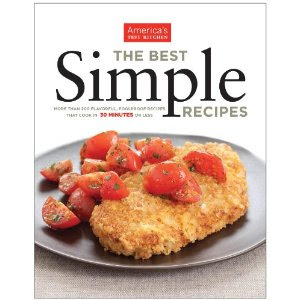 If you have been following me on this blog, you will know that I use many America's Test Kitchen/Cook's Illustrated recipes. So when I saw this book in the library, I was so surprised that the library was able to get such a newly released book and just had to bring it home to have a closer look.

But before I was able to flip through it, my mom spotted it lying on my table that night and she said she feel like having the breadcumb crusted thingy on the cover page for dinner. I thought that if ATK put this dish on its cover page, it must be good and simple to prepare. Perfect recipe to test the worth of the book. And that's what we had for dinner. 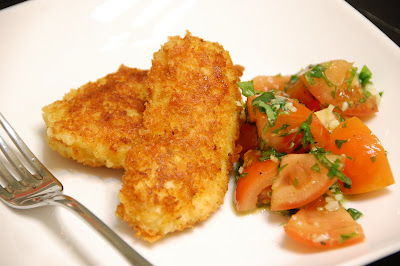 To shorten the cooking time and stretch the little amount of chicken breast I had for everyone, I cut the chicken into smaller strips. Almost on the brink of being a finger food rather than main dish.

This is my first attempt at making Parmesan Chicken and we all like having cheese in the breadcrumb coating. It adds extra saltiness and crunch to the crust.

While my mom and I were busy frying up the second batch, our little princess was quietly sitting outside devouring the first. When we came out with the second batch, she declared she was done with dinner and the plate was empty. And while she was wiping the corners of her mouth, she said: "Good choice. I like the chicken. Can you please make it again tomorrow?" As if bestowing some favour to her serf. 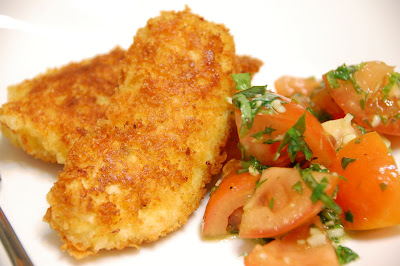 The tomato salad was unmemorable except I remembered longing for a salsa instead when eating it.

I would say that this recipe from The Best Simple Recipes was definitely a keeper. Parmesan cheese is gaining popularity in my household. As for the rest of the recipes in the book, I didn't have time to try them before returning the book. Will probably pick it up again the next time I see it.

I didn't write down the exact recipe cos I didn't follow the recipe (what's new?). But here is a similar recipe from Cook's Illustrated found at browneyedbaker.