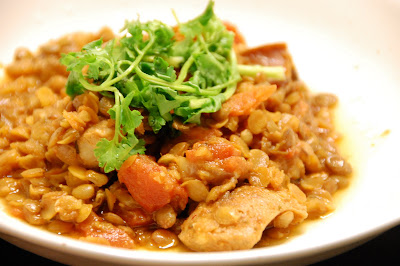 Whenever lentils appears on the table, our little princess would eye it warily. She doesn't like lentils, even when they are cooked with her most favourite thing in the world: sausages.

But being the story monster that she is, she is always hungry for a good story. In a bid to get her to try the lentils, I had sort of made one up about lentils.

Long ago in India, there was a widespread famine which lasted for three years due to the lack of rain. Crops fail and livestock died. People were dying of starvation and they were very sad. They prayed to Buddha for salvation. Buddha heard the prayers of the people and gifted them with a strange plant called lentils which grew easily even in poor weather. Soon lentils began growing in the abandoned farm lands. Many people started eating lentils and were saved from hunger and starvation. Even after the end of the famine, the people of India continued to eat lentils together with their rice because it is highly nutritious and keeps them healthy. The end. 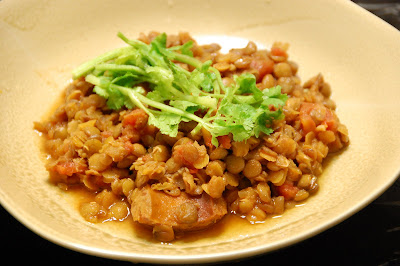 The recipe from Cook's Illustrated's Cover & Bake recommended the use of tiny French green lentils, but since I had some difficulty sourcing it, I had replaced it with the regular brown lentils. Ditto for the sausage. I replaced it for the regular Spanish Chorizo which is available here.

Apart from the browning of the sausages, which causes splatters, the dish is easy to put together. No pre-soaking of the lentils is required. Everything is cooked in just one skillet. The leftover lentils keep well in fridge and can be reheated without any lost in flavour.

If you are interested to find out more about lentils, hop over to The World's Healthiest Foods for the nutritional values and health benefits.