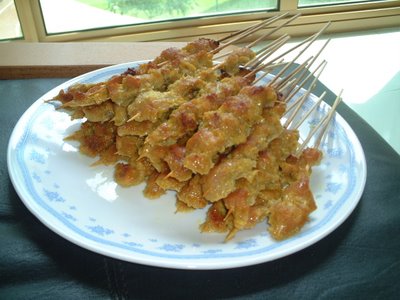 Where were you in those days of the Satay Club? I could still remember the smoke rising up from rows of grills tended by sweat drenched Malay men frantically fanning away. Sinking your teeth into those glossy plump satay still hot from the grill served with wedges of cucmbers, red onions and ketupat (compressed rice) under the starry starry night, ahah ....it was such a bliss. As they always, say: "Nothing last forever." Gone was the Satay Club, and its members were scattered all over Singapore. Some went into obscurity, some died a natural death and some, well, could never relive those hay days however hard they try.

Satay was something that I grew up with. It was one of my weekend foods. Every Sunday morning, my family will drive all the way down to a coffeeshop in Geylang just to satisfy our satay/mee rebus/mutarbak cravings. It was a very old and traditional coffeeshop (think: a big wide wooden framed mirror hanging on one of the walls, marble top tables with legs matching the deep brown coloured wooden chairs) ran by a Hainanese family, and the ONLY stalls that this coffeeshop had was this satay-cum-mee rebus stall and also an Indian-Muslim mutarbak stall. I can still remember the taste of the satay as if I just had it for lunch. The neatly skewered meat were tender and juicy and had a wonder mouth feel as it was well punctuated with small strips of fats in between. My family loved the peanut sauce, but I just don't care for anything with nuts. Again, like all good things, that rickety coffeeshop closed and we never got to know where the stallholders moved to. *sigh*

While skewering the satay, I fondly recalled how we hatched plots to "cheat" the Geylang satay man. As I have mentioned, the coffeeshop was traditional and so were the stallholders. The satay man doesn't jot down your orders and doesn't collect your money after serving you the food. He merely collect payment according the discarded sticks on the table. So you see where our grand plans were heading?

Thank goodnes for Mrs Leong, I was able to relived the memories those satay days again.