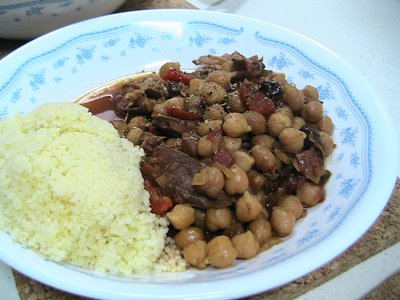 The first time when I came across this word couscous in Keith Floyd's tv programme, I thought to myself it must be some sort of vegetable. Just like how aubergine is actually eggplant and how courgette is actually zucchini. It's really confusing at times. But the only time when I really got to know what couscous was, when a friend from Haiwaii told me she made some couscous and she graciously unravelled my couscous puzzle.

Couscous (noun): a food, originally from North Africa, consisting of crushed wheat, which is often served with meat or vegetables.

In my simple term, I would describe the taste of couscous as light and fluffy crushed rice grains. It is really simple to prepare. I use the word prepare instead of cook, cos there really isn't any cooking involved. Just pour hot boiling water over the dried couscous and let it hydrate itself for 5 minutes and it's ready. Maybe this is the African's version of instant noodles?

To compliment the couscous, I chose the Moroccan chicken dish from Not Your Mother's Slow Cooker Cookbook. The wonderful cooking aroma of the dish permeates my whole house but, unfortunately, it smells better than it tastes. The dish lacks the "Oomph" factor. The taste was flat. More like a watered down version of an Italian chicken stew. Perhaps Moroccan food is like this, since this is my first tasting of Moroccan food, I should probably give Moroccan cuisine another go before I give up, and also to finish up my box of couscous. Hubby has to add a good dash of Tobasco to turn up the heat!