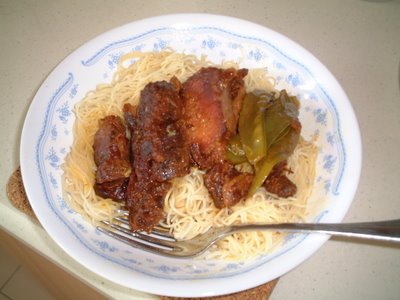 Did I mentioned that I bought this book Not Your Mother's Slow Cooker Cookbook by Beth Hensperger? Well, that was some time ago and I had only until recently rememebered its existence. Cos I have too many cookbooks lying around my study. =P I think it would be a nightmare for me to count them but who says anything about counting them? To think that I am on the verge of ordering some more from Amazon! *shudder* Another 6 more to be exact. *wink*

Ok, back to this slow cooker dish. Actually the picture doesn't do much justice to the food, but since I am not about to go into photography (even the basics) please bear with me. No, this is not a char siew dish, or anything like it. The dish is simple enough to put together. Just get yourself 1.5kg of really good spare ribs (actually my trusty butcher told me to its better to get pork collar; more meat with same flavour), and then mix soy sauce and 1/2 cup of marmalade (yes 1/2 a cup, and no, it's not THAT sweet and that's what gives the pork the deep red mahogany colour), and some other marinate. Dip ribs in the sauce, and dump it into the slow cook pot and also dump any remaining sauce in as well. And if you are like me wanting to balance your meals with some fiber, then just throw in a bunch of either sugar snap peas or french peas. Viola! We had it with pasta and then again with crusty bread the next day.

So are you tempted to dig out your slow cooker yet?