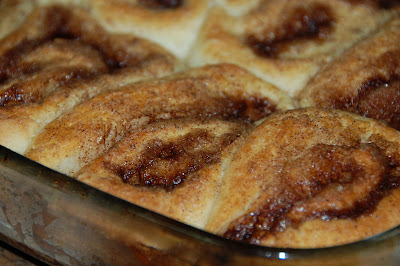 I love cinnamon rolls and when the craze hit this island a few years ago, I was over the moon. I had to get one each time I pass by a shop. The heavenly scent of it will lead me straight to the shop and fork out more than two bucks for a bun.
I have been eyeing this recipe from Baking Illustrated for a long time, but hesistated to make it since I have no underwriter (Hubby not interested in sweet stuff; Sis doesn't care for any; Brother hates cinnamon like poison). But when I have a carton of buttermilk that was going to expire, I knew I had to give this a shot.
This is a Quick Cinnamon Roll cos it is not leavened by yeast but with buttermilk and baking soda. Hence they called the dough a biscuit dough instead of a regular bread dough. I was quite disappointed with it as the aftertaste was sort of gummy. I prefer my cinnamon rolls made with sweet milk bread dough. Well, now I know better. There is really no short cut to wonderful food. And in this case, wonderful bread.