May 19, 2010
Now armed with my new found toy, I thought maybe I ought to try a few more dough recipes. As the current trend is now pizza making, I picked up another recipe from The New Best Recipe. The ingredients list looks pretty much the same as the recipe from The Joy of Cooking but the proportions for water differ slightly, so that made me quite curious to try if there's any difference.

As a rule of thumb, I'd add less water to the initial mixing when in doubt. You can always add more later, but not the other way around. So in goes one and a half cup of water into the mixing bowl and I waited. The dough mixed beautifully and pulled away from the sides of the mixing bowl cleanly without the need for the remaining quarter cup of water. Hmm ...

As you might noticed, I am a big fan of Cook's Illustrated for the sole reason that their recipes seldom fail. But if I had followed the recipe to a T, I would have ended up with a very wet dough. Seems that I am not the only person complaining of wet dough here.

I guess I'd have to agree that cooking is mostly an art.

Speaking of art, as you may have already know, I have zero talent in that visual section. Which sort of explain the looks of my sausage rolls, which I made with the pizza dough. 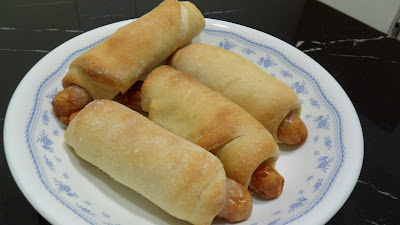 What's a pizza making session without an attempt to clear the fridge? In goes the odd bits of sauteed zucchini, onions and peppers with olives. 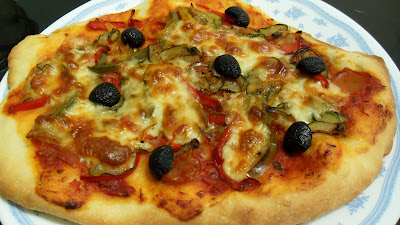