October 15, 2010
I don't know about you, but I am the sort of person who hates spending time searching for things that go missing. But have said that, anyone who knows me will know also that I am quite a disorganised person. That's quite oxymoronic, isn't it?

That brings me to this recipe of Baked Chicken with Fennels, Tomatoes and Olives, which I had earlier made it to a raving success. I thought it would be nice to have the dish again. Then disaster struck.

I lost the recipe.

Lost as in the recipe just vanished without a trail. And the stupid me had totally and conveniently left out where is the source of the recipe in the earlier post. Just great. I spent hours flipping through my cookbooks and searching the internet to come up with nothing.

So I stuck those chicken breasts back into the fridge and mope around until dinner time came around.

Then I flipped More Best Recipes hoping to find something to do with those chicken breasts. In its Cooking For Two section I found a recipe with the same heading for the recipe I was looking for but it reads completely different from what I had attempted the last round. And I really don't like the idea of mucking around a recipe which is already perfect. Not to mention a perfect recipe that has been downsized for 2. 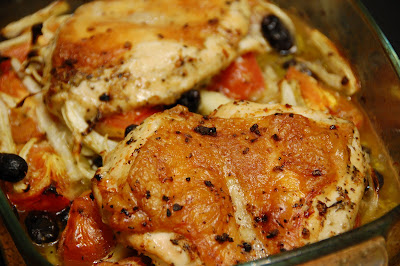 As you can see, the chicken turned out almost the same as the previous batch. On top of that the recipe cut out the brining of the chicken prior to baking, which was a huge boon since Hubby and Princess were starting to dig around for scrapes of food. 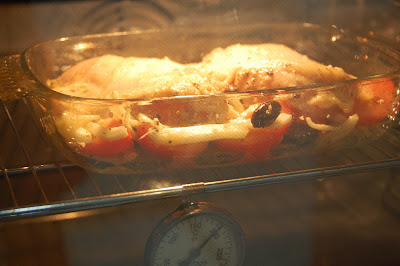 I managed to keep them busy for two hours while the chicken baked. Don't ask me what, I just can't remember as my mind was mostly on the chicken. 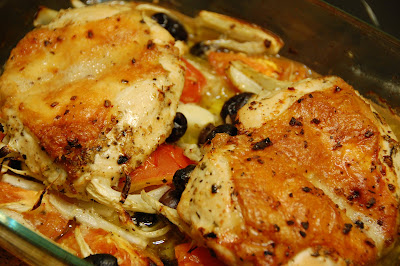 The chicken was delicious. Despite it was from the section Cooking for Two, we still had plenty of leftovers. This made me rethink about my earlier repulsion at the books that America's Test Kitchen churned out for their best 2009 and 2010 recipes that have been downsized for two. Perhaps it was too hasty for me to jump in a conclusion base on its title. Cooking for Two may just be the thing for us especially for dishes that our little princess may turn her nose up on.

So lessons learnt: (1) ALWAYS write the source of the recipe; and (2) try out the cookbook before writing it off completely.

Have a good weekend!