November 22, 2010
Yesterday, I saw an article on The Sunday Times about more supermarkets here are offering a wider variety of cheese in response to the increasing local demand. I'd say it's about time!

I grew up on pale soft square slices of so-called cheddar cheese, often found on my breakfast plate in those ungodly morning hours during my school days. I was just too sleepy to even want to know what I was eating.

This was my only exposure to cheese until Pizza Hut came along with mozzarella cheese and wedges of Laughing Cow cream cheese started popping up in the supermarkets. It was pathetic.

Years later, I still buy those highly processed sliced cheese from time to time despite their almost barely there cheese taste, for our little princess' palate is simply too unaccustomed to the taste of real cheese.

And I thought that her immature palate was the only one I had to deal with. Until I met blue cheese.

If you Google blue cheese, you will most probably see words such as "pungent", "odour" or "ferociously overpowering" used to describe its smell. For me, I would best describe it a bad case of athlete's foot.

It was bad. Real bad. I got dirty looks from Hubby and our little princess pinched her nose while trying to focus on her cartoon.

But all that changed when this appeared out of the oven. 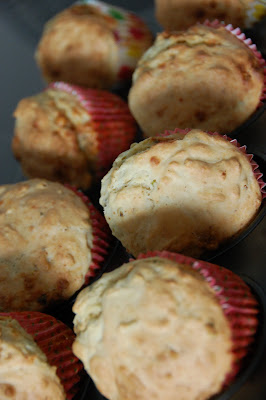 Smell of melted salty cheese drew everyone to the table to have a closer look. Can this really be made from those blue-veined crumbly stinky cheese? 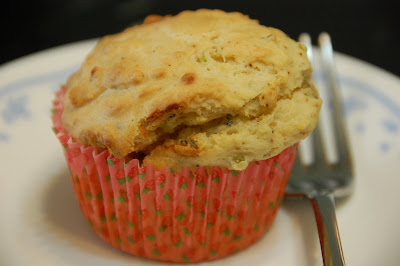 It looked no different from my usual bakes with its slightly skewed cap top that reminds me of a beret. 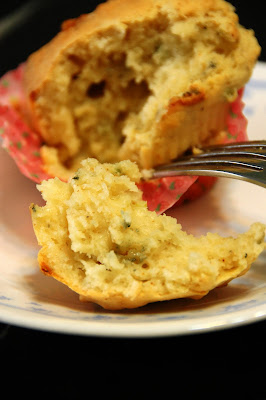 Although anything eaten straight out of the oven is wonderful, I have to say that it was more so for these muffins. The smell became quite subdued, almost crossing over to lightly aromatic when warm. The pockets of slightly melted cheese in the salted soft fluffy crumb tasted tangy and sharp.

I highly doubt that I would ever want to buy blue cheese again. The scornful looks I had received from both of them warned me so.

This recipe came from The Best of America's Test Kitchen 2007. The very same book which I had put to test earlier the year. I thought that I was done with the book, but somehow, I just had to flip it again. And look what I've found.