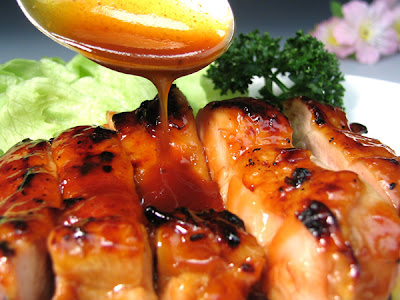 Teriyaki chicken is one of the most common dishes outside of Japan. Ask anyone to name any Japanese food and chances are you will hear this being mentioned. Although it is available at most places selling Japanese food, it is extremely challenging to find one which is truely well done. Most of the time what I get are usually rubbery and overly sweet chunk of stringy meat. It leads me to wonder why would they think that anyone would want to eat such stuff?

According to Wikipedia, teriyaki is a cooking technique used in Japanese cuisine in which foods are broiled or grilled in a sweet soy sauce marinade. Simple as that. Just marinade the meat for a short while and it is ready to go on the grill or frying pan.

When I saw a recipe for teriyaki chicken in the cookbook for this month, I thought I won't be making it since I already have made this before. More than once, as a matter of fact. But who would ever get sick of eating teriyaki chicken? Except for those rubbery, overly sweet and stringy ones. Sorry, just had to repeat myself for all the badly done ones which I had been served. The recipe was simple, in fact too simple. It doesn't even call for the use of sugar at all, so it is good for the non-sweet tooth.

1. Mix the sake, soy sauce and mirin together in a bowl. Add the chicken into the bowl and let it marinade for 10 min.

2. Remove the chicken to dry on a kitchen roll and reserve the marinade.

3. Heat some oil in a frying pan and add the chicken to the hot pan. Fry until the chicken is golden on both sides. Add the reserved marinade to the pan and let it simmer until the sauce has thickened.