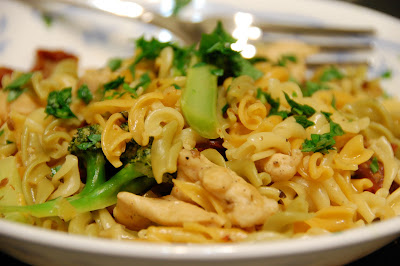 Chicken, broccoli and pasta. It is the perfect one-dish meal one a weekday night. What's not to love about it?

Since my food resolution has been about eating more whole natural food, I should be picking up another pound of chicken. But because I was trying out this recipe for the first time, I wanted to know how it really taste like before I start messing around with it.

If you have been following my blog for some time, you would know that I am fearless when coming to messing around with recipes from Cook's Illustrated/America Test Kitchen. Just not this time.

The recipe for this easy pasta dish can be found at ~wingerz and I got mine from the Cook's Illustrated Annual 2005. I love their annuals. 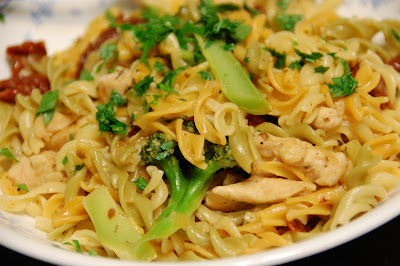 Any difference in the two versions? Being a healthy family cookbook, the butter had been dropped in favour of olive oil. This recipe should be cheaper since it only calls for half a jar of sun-dried tomatoes. But wait ... it added 2 anchovy fillets. So after making the pasta from this recipe, you will end up with half a jar of sun-dried tomatoes and half of the tinned anchovy. Great if you would consider making another batch. 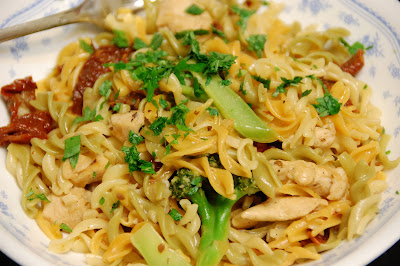 As for the version I made, it is said to be able to serve four but we were fighting with spoons to dig into the skillet.