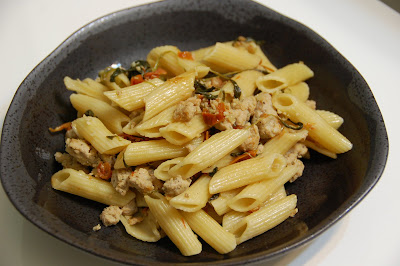 A picture of what it was suppose to look like, can be found here.
The dish cooked like a regular fried pasta which I think is not foreign to people living here. But then again, I must confess that I didn't follow the recipes entirely. I lost it somewhere 50 - 55% way through it (again, I have already confessed this many times that I don't follow instructions well and this is an America Test Kitchen/Cook's Illustrated recipe).
The dish is really simple to put together and really satisfying. I made the sausage in advance and just boil the pasta before I started cooking. Yes, I don't fancy having murky pasta water as sauce, thank you. The recipe instructed the penne to be cooked in both and cream, but I'll pass.
After cooking this dish, I have come to realise that I could put a pasta dish similar to this on a weekday dinner. Duh! I am officially declaring pasta as one of the weekday dinner menu!