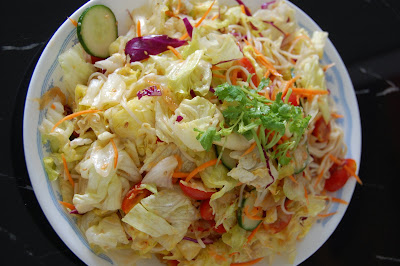 While tossing up this salad in the bowl, I realised the colours of this salad much resembled that of the Yu-sheng (鱼生) we would eat every year during Chinese New Year with all the bright colours.

But this salad has none of those sugar soaked, artificial colour coated bits of who-knows-what in it. I was intrigued by the delicate lightness and well balanced flavour of the Wafu Salad I had at Tonkichi. We eat there at least once a month and had never noticed this salad.

When I got back from dinner that night, I reached for The Japanese Kitchen to check up the recipe for this Japanese vinaigrette. According to the author, Hiroko Shimbo, salad is a recent addition to the Japanese diet and this recipe for soy sauce salad dressing was always popular among her students.

Unfortunately, this soy sauce salad dressing was not quite the dressing used in the Tonkichi Wafu Salad. But it is a great dressing in its own right. I made it twice in two days, and on both occasions I had to increase the amount of soy sauce used to achieve the right level of saltiness. Perhaps this was because I was tossing it with the soba noodles whereas I suppose the recipe had intended it to be for dressing normal salads.

I tossed this salad with the following, but I am sure that the anything-goes motto works well here too. 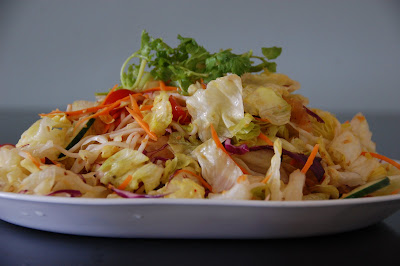 Maybe for a change, I would volunteer to make this Soba Salad in place of the usual Yu-Sheng that I am in-charge of buying for the reunion dinner.

(adapted from The Japanese Kitchen)

Combine in a screw cap bottle and shake well. Remove the garlic before use.