The Rotisserie - Chicken and Gourmet Salads 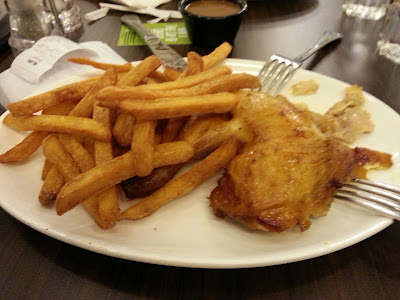 A quick dinner at Marina Bay Financial Centre Tower 3.
The idea of holding your name out for something so simple can be a dangerous one. I mean, if you call yourself a patisserie, people will come expecting macaroons, meringues and other French-y sweet stuff to taste reasonably good or better than shops that didn't call themselves as such.
I think such was my case when I popped into the shop. I had some expectations that their roast chicken would be somewhat of their signature dish with some bones to show for it. Unfortunately, it was only so-so. If you are someone looking for plain and simple roast chicken as compared to those of us who enjoy it with a touch of herbs, then this is right up your alley. The chicken was no doubt tender and juicy but it was also red and bloody close to the bones which suggested that it was a frozen chicken rushed to the rotisserie before it was fully thawed. One of these days I will have to figure the science behind this. To me the skin of a roast chicken is always the star feature. However, their chicken skin here looked better than it taste. Rubbery and plain.
Our choice of side was straight cut fries which crunched more like potato chips out from bags than french fries. They did call it chips though, so I guess I had been warned. Portion was generous, we had trouble finishing our quarter chicken and those overly crunchy chips. 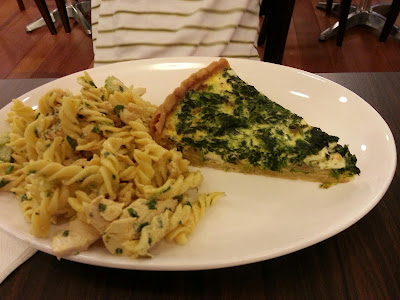 I ordered a quiche with a chicken pasta salad as side. Carbo overload. The quiche was so good that I wished it was a deep dish quiche instead. Well, too much of anything can't be good for you.
Will I be going back there again? Well, if it is solely for their roast chicken, let's just say that I think I can make better. How about the quiche? Well, perhaps that might be the only reason to go back again.