But yet, in a recent shopping trip, I found myself saying to Hubby:"I want to get the dress/top/bottom similar to the one the actress wore in [name-of-latest-Korean-drama-to-have-graced-my-tv]."

By the way, I have finally laid my claws on Slave Hunter! If only I could say the same of on lead actor's six-pack. What a hunk! It is truely terrible for the producers/directors to cast such attractive actors in a drama, I get so distracted and Hubby distraught.

Then I found myself opening up a pantry cabinet stuffed full with cans of diced tomatoes. It took me a while to recollect why I actually I bought them in the first place. That's what Korean dramas do to me. They filled my brains with hunks.

The cans of diced tomatoes were earmarked for the recipes from The Complete Book of Pasta and Noodles. After flipping through the book, I started conjuring images of piping hot pasta topped with chunky tomato sauce and flakes of Parmasan cheese shavings. I can think of little else when I am in the daydreaming state. Cans of tomatoes, packets of dried pastas and bottles of olive oil start piling up in my shopping trolley each time I hit the supermarket.

Unfortunately, dried pasta was just not what I had in mind the other day. I wanted to dip my toes into making gnocchi. I wanted to know what homemade fresh gnocchi tastes like. Not those frozen nor commercial ones. I wanted the real mccoy.

I know I'm in good hands when the book dedicated a whole chapter to gnocchi alone, which included sections discussing which potatoes are the best for making gnocchi (it's russet, by the way, which thankfully is available in this part of the world) and how to shape gnocchi. In the typical layout of Cook's Illustrated books, the book also discussed the various pitfalls of making gnocchi such as too much liquid in the mashed potato, too much flour and over kneading. Well, this book is from the editors of Cook's Illustrated, one wouldn't have expected anything less than completeness from it. Apart from potato gnocchi, the book also included recipes for non-potato gnocchi such as Spinach and Ricotta Gnocchi and its variations as well as Baked Semolina Gnocchi.

As a further confidence booster, from what Elizabeth David said of gnocchi in Italian Food, it shouldn't be too difficult.

"Gnocchi made of potatoes, or of semolina flour, or of spinach and ricotta, are cheap and easy to make."

"... their merits as inexpensive, attractive, and original little dishes will be quickly perceived; they are easier to make than ravioli, as no rolling out of paste is involved."

She went on to provide recipes for green gnocchi, cream cheese gnocchi, potato gnocchi and semolina gnocchi. Her instructions were short and straight forward. 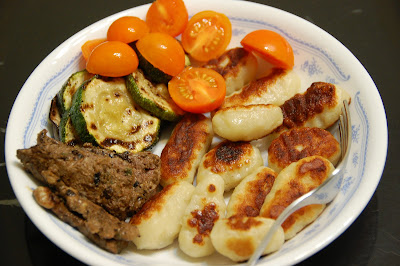 Gnocchi (pronounced as "nee-yo-ki") means "lumps" which maybe what it is at the minimalist state. However, most gnocchi are "petite potato pillows that hug, in between each ridge, a little bit of sauce". But there are some gnocchi which are from the non-potato part of the family tree. These are typically made with either wheat flour, cheese and semolina.

Then I added salt and flour and mix them until the dough is agreeable to be rolled. Not that difficult either.

And the fun part is rolling them into dumplings and pressing them to the thines of the fork. Not difficult at all.

If you had boiled those little rice balls we call tang yuan (汤圆), then you know how this works too. Just drop the little dumpling dough into a pot of boiling water and wait until they start to float. Give it another minute to float in the pot and scoop it up.

I pan-fried them in a little olive oil to give it a crunchy exterior as an insurance against possible boycot from our little princess. But this is entirely optional.

And here's how it looked after I blanketed it with some meat sauce. 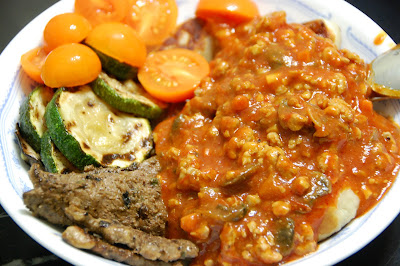 In case you are wondering what are those side kicks on the plate, they were leftover from previous dinners. Cos this plate was assemble for Hubby (aka Terminator of Leftovers).

So how did these homemade gnocchi taste? They were crunchy on the outside, soft on in the inside and chewy. When I was pan frying it, my kitchen smelled like a roti-prata shop. In between frying, I SMS-ed Hubby: "Need curry." To which he replied: "??? Thought you were making gnocchi?" I like pulling the carpet from under him. It keeps him on his toes.

I'm not entirely convinced that I made my gnocchi right since I've seen adjectives such as light, delicate, pillowy, fluffy used to describe it.

A cross-check with The Silver Spoon, the bible of authentic Italian cooking, recommended that it is better to steam the potatoes rather boil them, so that the gnocchi are lighter and at the same time, tastier and firmer.

Sigh ... Guess this time round wasn't much of a success.

So here are my top tips on making gnocchi:

* IF boiling the potatoes, mash them on a board instead of a bowl to to allow as much moisture as possible to evaporate and maybe even chill the mashed potatoes before kneading.

* The standard potato-to-flour ratio is 8:1 by weight. Too much flour makes all gnocchi tough, but not enough flour can make them disintegrate during cooking.

* Since it is crucial to ensure that you do not add to much flour, the best way to test is to have a pot of water boiling and pinch off a piece of the dough and boil it to make sure it will hold its shape; if it does not, knead in a bit more flour.