I do. I love it. As a guest at such gathering, you end up eating something which you do not expect or would not normally eat. As a host/hostess, it takes the whole load of stress of food preparation off your shoulder, except for some coordination of the food that your guests prepare to avoid duplication. It could get competitive. Possibly ugly. Men. *Roll eyes*

Anyway, during such gathering we always would volunteer to bring a cooler box loaded with chilled drinks. Trust me, most host/hostess would thank you for it. They might even kiss the ground you walk on, if they were desperate. Our cooler box is big enough for a toddler to sit in it and splash around with some ice cubes. One of best thing about bringing a cooler box? We usually end up bringing home a lot more than we had brought along. Sometimes we ended up with ice cream. During our Brunch, we ended up with yogurt.

The other day, we ended up with bottles of beer. I had devoutly prayed for some of those leftover caramel ice cream somone brought, but instead these bottles of beer turned up in the ice box. We don't drink much. The bottles of red and white wines in my fridge are strictly for cooking only. They stood around the fridge shelf looking sad and dejected and probably cursing their fate for having ended up in such unappreciative human's fridge. I even told Hubby about their plight. To which he asked me to cook something with them.

Off the bat, I could think of probably fish and chips. Beer batter for the fish is something which I had read about. Other than that? I am as lost in the time-space continuum theory.

Then a recipe caught my eye. Beer-Batter Cheese Bread. Is that possible? Does it taste good? There is only one way to find out. What's to lose? Maybe wasting a really good block of cheese stings but that's the usual cost of experiments. 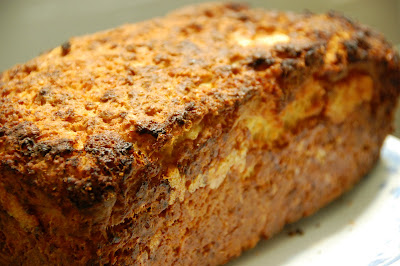 This recipe is absurdly simple. And coming from The Best of America's Test Kitchen 2009, though they don't cut corners, it just made me feel suspicious. Are beer-batter bread that easy? 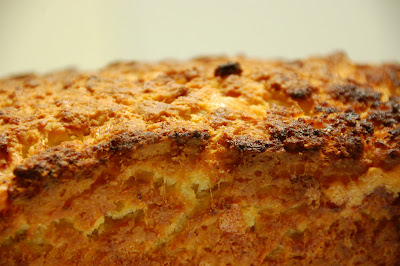 The crust was divine. Crunchy, cheesy and salty. Every time you bring your teeth down on it, you could hear the satisfying crackle of the crust to the last bite. The crumb was soft and surprising airy. This was perhaps the work of the gas in the beer. However, I detected a tinge of sweetness in the bread. It felt disconcerting. I guess it was the use of 3 tablespoons of sugars - it just feels like a lot for a savoury bread. The dough smells mostly of salty melted cheese, but if you really want to put it close to your nose, you would probably detect a hint of the beer.

I would be eyeing those bottles of beers next time at pot luck gatherings from now on.

2. Mix all the ingredients, except the beer and butter, in a big mixing bowl.

3. Stir in the beer nd mix well. Pour the batter into the loaf tin. Spread evenly to all corners of the tin.

4. Pour the melted butter evely over the batter.