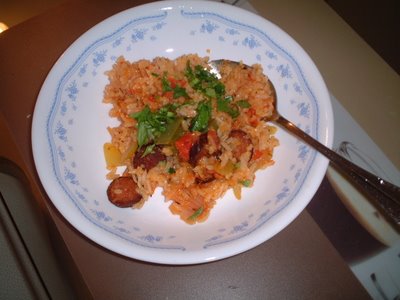 "Good-bye Joe, he gotta go, me oh my oh
He gotta go-pole the pirogue down the bayou
His Yvonne the sweetest one, me oh my oh
Son of a gun, we'll have big fun on the bayou"

"Jambalaya and a crawfish pie and fillet gumbo
For tonight, I'm a-gonna see my my-my cher a mi-o
Pick guitar, fill fruit jar and be gay-o
Son of a gun, we'll have big fun on the bayou"

Whenever I hear any song from the Carpenters, I would inevitably recall times when I would play their Gold Collection all day in the background while studying. The CD is probably unplayable now, but (shhh....) it's a borrowed copy. Years later, I finally owned one and I still play it once in a while while rocking baby to sleep.

For the longest time, I never had any idea what the lyrics was about. Seemed to me that she (Karen Carpenter) was just singing nonsense, just like some of the Mother Goose Rhymes. But now I know better. If you are like me and like cajun-spiced anything or can't stop eating churros, then we are on the same page.

Jambalaya is a rice dish in Cajun/Creole cuisine. Rice is usually cooked in a stock, flavoured with onions, bell peppers and celery, then topped with meat (cured and/or fresh).

Made Chicken Jambalaya last night and it tasted wonderful. It was a riot of spices, to say the least! The combination of celery, onion and green bell peppers gives the dish a bold flavour and bright colours too. The rice was not as dry as what we usually would expect when cooking white rice to go with dishes. It bears a slight resemblance to the risotto, yet the rice is firmer.

When cooking this dish, I used an ingredient which I have no idea it existed - chorizo. One quick look at it, I might have thought that it was our chinese sweet sausage (lap cheong), but no, the pair of chorizo I bought is darker and has a sheen of spicy-looking oil coated on their casings. True enough, they were spicy and smelt of smoked brats. Wonderful tasting but quite expensive (S$28.90 per kilo).

And what's the best thing I liked about cooking this dish? It's that everything is prepared in succession in one pot! Yay!!!

I am already looking forward to trying out more Cajun cooking!