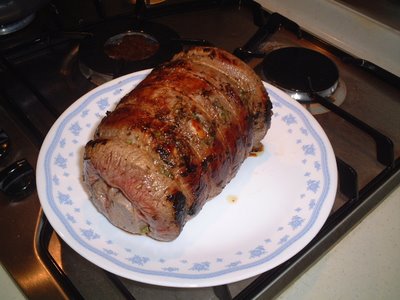 If you still haven't discover the joys of cooking, then you ought to get yourself this magnificent book titled the same: Joy Of Cooking. This book is absolutely amazing. Even though I haven't the time to read it from cover to cover, just skimming through a few pages is choking my brains with so much infomation! That's why the book is 1,152 pages thick!

As a start to my first test of the recipes from the book, I chose Italian Pot Roast (Stracotto). This is my first time buying a nicely tied roast beef (raw), which save much of the time in preparation. Hubby did the stuffing of herbs into the roast and browning it (which was the oiliest part of the deal). After cooking was done (which ended around 1+am), my house smells like some Italian restaurants. The pot roast was delicious and it was my life saver! As after cooking it, my baby had to be admitted to hospital and confined there for 3 days. The roast kept hubby an me going for those few exhuasting days when we couldn't even leave of the ward.

Conclustion: Very aromatic due to amount of herbs. Actually, I find almost to the brink of being over-powering, but still ok. The browning of the roast turn out wonderfully textured outer layer for the roast. Perhaps I don't know my wines as well as I would like, my sauce turned out a tinge too tangy, but was otherwise very appetitising. Will definitely make it again, but with less herbs, of course.

PS: Sorry, didn't take picture of the finished product as I wasn't really in the mood to take any.

Set aside half the mixture and mix the rest with:
1 bsp olive oil
1/4 tsp ground black pepper

Stuff the slits with the oil and herb mixture. Heat in a heavy pot over medium-high heat:
3 tbsp olive oil

Add the roast and brown on all sides until dark and crusty, about 20 min. Maintain the heat so that the meat sizzle but does not burn. Remove the roast from the pot and pour off all but 2 tbsp of fat. Sprinkle the roast with:
1 tsp salt

Bring to a gentle simmer and cover the pot. Reduce the heat to its lowest setting. Cook the roast slowly, so that the liquid just barely simmers, for about 2 1/2 hrs. Turn the roast every 30 min or so. When the meat is tender, remove it to a platter and cover it with aluminum foil to keep warm. Skim off any fat from the surface of the liquid. Season to taste.