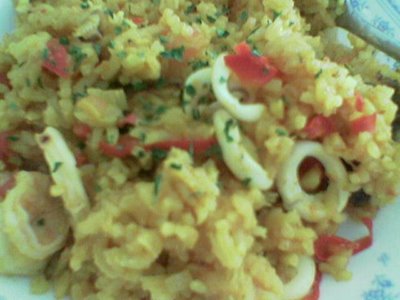 A dish made of saffron-flavoured rice with chicken, shellfish, and a variety of other ingredients cooked together, originally from Spain.

I have came across this dish many times in a few of my cookbooks, but somehow it just didn't make it to my "to-attempt" list. However, when I have some squids and prawns sitting my fridge, the first recipe that came to my mind was this foreign sounding dish (so foreign that I am not even sure I know how to pronounce it!).

Much like the preparation of jambalaya and gumbo, this is a one skillet dish. Everything is cooked in just one pan. The only thing was that I didn't have any saffron, which by the way is a very very expensive herb, and hence will have to rely on turmeric to lend the yellow collouring to the dish. As for the lack of flavour due to the missing saffron, I could only guess how the original would taste like.

Since it is a one skillet dish, it also means that it is a one dish meal, which also could be eaten with just a spoon. If you have read my earlier posts, this falls straight into Hubby's definition of quick food. He couldn't be happier that this dish was on the menu. (^.^) Well, hope that he likes it enough to finish up the whole 2 cups of rice I dumped in to cook it.

P.S.: Forgot to bring my memory card for camera back home, had to take with handphone. Sorry for the poor photo. =P