December 21, 2007
Two days ago when I picked up my princess from school, her teacher handed me a sticky plastic bag. She told me that this was her art and craft work - ladybird of half an apple, poky sticks, raisins and chocolate chips. But whatever that I was holding didn't looked like any ladybird I can imagine of and I was half hoping that she wouldn't want to eat it afterwards. Alas, when we were in the cab, she asked me to give her some chocolate chips. So I looked hard to find where they were. Just as well they had all melted (much to her disappointment). Then I promised her I would buy her some chocolate chips.
So the next day, a bag of choc chips ended up in my shopping bag. Initially I had wanted to make choc chip scones, but we have 3 spotted bananas screaming at us to do something about them. So I made these instead. 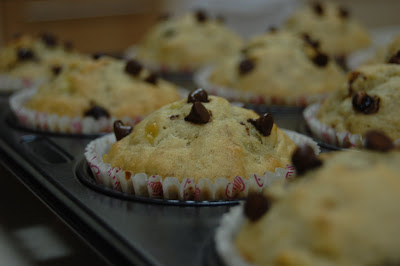 I have adapted the recipe from Joy of Cooking '97 ed. so that I would be able to incorporate some of the choc chips in it. It was really easy to make and it took care of all 3 bananas at one go. Yipee!