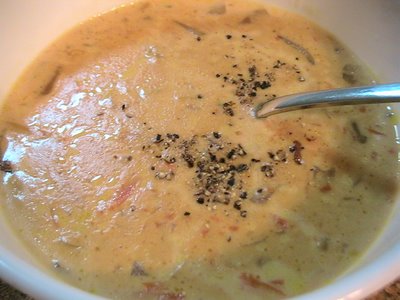 I once heard Hubby commented that he likes chowders and especially clam chowder, so I filed that in memory under "KIV". I was quite hesitant about cooking clam chowders of all chowders cos I am not really a big fan of clams. Again, browsing at Allrecipes.com, I found this recipe and thought maybe I would give it a shot.

Unfortunately, the chowder as it was too thick and creamy for me due to the huge amount of evaporated milk used. But Hubby said loves the chowder and finished almost the whole pot by himself. Taking the chowder as a standalone, I find it rather rich, so Hubby suggested having it with some butter biscuits (think Ritz Crackers) or using it as a dip for steamed broccoli and cauliflower. Both serving suggest is quite good as it tones down the creaminess.

Note: If you are interested the try the above recipe, please leave the evaporated milk out and cook on HIGH for 4-5 hour or LOW for 9-11 hours. Add the evaporated milk together with the clams and then cook for an additional hour. If not, the milk will cuddle in the crockpot.